Making my way to the gallery, I wound up inside a nightclub. Google Maps was adamant that I was in the right spot and for a few minutes, I honestly believed maybe this gallery was situated inside a nightclub; that certainly would give it a unique quality. After a phone call to the gallery, I was instructed about a giant green door which was slightly obstructed by the ongoing renovation of the night club, but once spotted I did wonder how could it be missed.

Jack Bell Gallery looks to represent contemporary artists from around the globe and with it only been around in London since 2010, they’ve had some amazing work displayed there.
The artist, Armand Boua, whose “Clache Moi” exhibition was on show from 17th Feb – 3rd March, is an Ivorian artist, born and currently resides in the economical capital Abidjan, Ivory Coast. The paintings aimed to portray the life of the street kids of his home and the violence that ensued after the presidential election in 2010 is said to have influenced his work as children found themselves separated from their families which ultimately led to fending for themselves on the streets.

Two pieces that stood out for me: 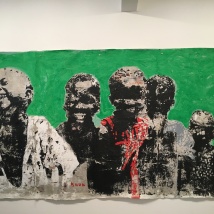 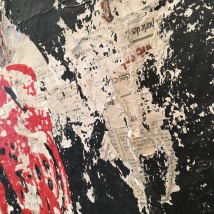 Boua captures joy and innocence so well with this piece. This painting reminded me of the same happiness I saw across the faces of the street kids of Surulere, Lagos in Nigeria despite their circumstances. Finding delight in the smallest of things. A natural reaction to this beautiful work is to smile back and why wouldn’t you? I hear the laughter from the boy on the far left; it is a belly laugh that goes on for a couple of minutes. It is a laugh that causes a little tear to trickle down the left side of his cheek. This, by far, was my favourite painting. 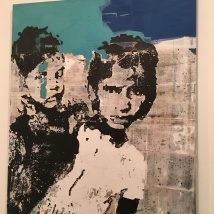 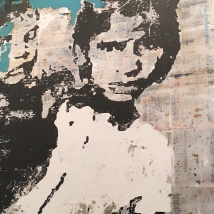 Putting the influence of Boua’s work into context, it was easy to give this particular painting a full background story just by looking. I imagine this young girl, no more than 10 years old, forced to mature earlier than planned. A child being responsible for a child. With her younger sibling on her, she looks for ways to fend for the both of them. Possibly walking down the streets of Abidjan, asking for spare change that would mean her and her sibling won’t go hungry that day. (I could just be reading into things way too much like our GCSE English Literature teachers taught us to do but hey, its come in handy.) This painting felt much more like a photograph than anything and what i found interesting was how it comes in focus as i captured it on my iPhone, but, standing right in front of it, it was out of focus.

Other paintings from Boua’s exhibition:

Although this exhibition has ended, that doesn’t mean you have to miss out on more excellent work coming to Jack Bell Gallery. The next artist exhibition, Baatarzorig Batjargal, starts from the 10th of March – 24th of March and a private viewing will be held on the 9th of March. Get in touch with them if you’re interested in attending: info@jackbellgallery.com

*Update* – Armand Boua’s work will be featured at the 1:54 Contemporary Art Fair happening in October. Be sure to get your tickets here.

This site uses Akismet to reduce spam. Learn how your comment data is processed.